Yesterday I became locked out of my Facebook account, most likely because of increased activity from the norm which was the result of posting a video made related to the Stop 5G campaign and the fact that over 3500 signatures secured a Debate at the Council meeting on Tuesday 10th September and where the relevant speakers and Councillor responses were included plus an added testimony about the harmful effects of 5G RF radiation on public health by Barry Trower, to provide balance, extracted from the YouTube Video titled Barry Trower on 5G.

So yesterday I successfully identified the four statements made by myself which were required as proof of my identity and the process went as far as being able to submit a new password with the whole process being accepted.

Afterwards I immediately attempted to log on to my account again only to discover that a whole new security check was presented to me so I decided to log off and forget about the whole thing until the following day.

So here we are this morning, and again I decided to choose four sentences that I had written in order to prove my identity. There were three obvious ones and the fourth one I had reservations about but was the only one left as the remaining could not possibly be. It was related to some features of the GQ-EMF-390 rf, emf and ef meter, an item which I had bought to help identify if RF frequencies were suspected of being the cause of headaches which began for the first time in February 2019. The comment presented was not one that I could identify as being said on Facebook but possibly on Amazon but it was the only content that could possibly be related to myself out of those remaining. My suspicion of doubt had been confirmed and so I remained locked out therefore I chose the next option of having a code sent to my mobile phone, a code which never came despite requesting a resend twice. The telephone number is correct and the phone is on patiently waiting for the code to be received. And again it was never sent.

I am still locked out of my original Facebook account and my suspicion is that it is deliberate!! for obvious reasons.

Here is the possibly offending material posted yesterday to many groups and so far there has also only been three views in 22 hours, according to YouTube statistics but then again nothing has been normal for many years since removing all permissions for Monetisation due to adds from unwanted third parties placing placing them on cover band videos that had music copyright warning on them which I had been particularly careful to observe.

[Quote]On Tuesday 10th September 2019 supporters of the Stop 5G Campaign gathered outside of Bristol Council House, recently renamed City Hall, in order to bring awareness to the public of the dangers of Wi-Fi enabled 5G on all living things. Afterwards at 6.00 pm they filed Into the Public Gallery to witness and support the contributions from Amber Eastman followed by Karen Churchill who both did their best considering the restriction of time imposed upon them. The accumulation of over the 3,500 signature threshold qualified a Councillor debate with Sally Beare presenting the petition requesting a pause to Bristol’s 5G roll out until it has been proven to be safe.

First to respond was Thomas Brook, the Labour Councillor for Bishopston and Ashley Down, who is also the Chair of Bristol Development Control Committee as well being on the Public Control and Safety Committee. So having heard his impassioned opinion on 5G based on his faith on the information espoused by Health England I thought it expedient to include some some balance by including some insights, following the video clips of the Council meeting, from the experience of Barry Trower who is the World’s primary go to person on the effects of Microwaves on the Human body. All other Councillors have their political affiliations identified prior to speaking.[unquote]

Today I decided to take a look at why Poland has been progressing by leaps and bounds in it’s economy which in turn benefits the population, as I had been aware that Polish people here in the UK began returning in 2014 and through enquiries learned that trade across the German border had been benefiting the Western side of Poland that the new stream of Polish migrants were from the poorer Eastern part of Poland nearer the Russian influence. All conditions had improved in Poland without inflation so that the value of their wages there would be greater than those earned in Britain given House inflation and ever increasing bills. Poland , like Britain, kept its own currency the Zloty.

Next I took a look at the German model of how things are run there, education, economy and work.
I just wanted to learn what other countries do to make themselves successful.

Along the way I watched a few videos about wage inequality in the UK and how this affects the Northern parts of the country, in particular, and learned that the highest concentration of deprived areas in the whole of the EU exist in the UK in the areas that were once the heart of the Industrial Revolution while the concentration of the highest earners exist in London alone out of the whole EU but they also coexist with some of the poorest amongst them.

It just so happened too that in one of the various videos about the EU, a chart of the money received by each country from the EU against what is paid in was shown and it illustrates how Poland is favoured by Germany in contrast to that of the UK which has the most deprived areas, and this in a sense conveys the real ongoing attitude towards the UK which is a similar one to when we first Joined the EU and our fishing grounds were split up and decimated by French design as a condition of joining the EU. The EU plan for the UK is that we have an economy based on Tourism and it is easy to envisage that the sole purpose of HS2, as an EU project, be for the efficient shuttling of tourists, eventually all the way to Scotland.

Germany had at one time been looking eagerly towards trade with Russia but that all came to an abrupt end because of sanctions imposed by America in March 2014 and the EU as a block was made to comply also. (https://www.youtube.com/watch?v=Yhcc4v1kh-Y)
Why Poland is the new France for Germany
Konstanty Gebert & Ulrike Guérot

https://www.ecfr.eu/article/commentary_why_poland_is_the_new_france_for_germany
[Quote]Germany and Poland have become close political allies. The future of the European Union may be decided in Berlin and Warsaw. But has Poland replaced France as Germany’s most trusted European partner? [unquote]

Why is GERMANY such an INDUSTRIAL LEADER? – VisualPolitik EN
https://www.youtube.com/watch?v=CAbcHMOwobg 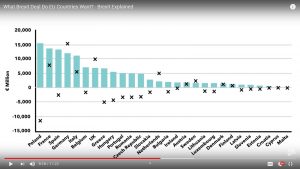 X marks the net contribution to the EU against what we get back. (Self explanatory) 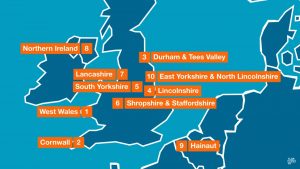 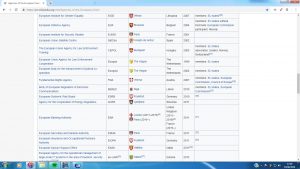 An old screenshot showing how the Agency of the European Banking Authority, once located in London, has now been transferred to Paris, France in 2019, showing that agencies which would normally be concentrated in each sovereign country are split up between between member states in the same way that component parts for manufacturing are distributed around in the just in time delivery system. Therefore no one Country can operate independently.