I do not want to make a  big deal of this. I do not like to, either. I have been educated in maths and engineering and such things and have always had some pet words and phrases and quotes regarding pseudo-science and pathological ideas. It took me lot to integrate myself many things in a unified manner, to look into the mind and matter in a horizontal way.

One afternoon when I came to this site for some house-keeping chores I became very surprised. I noticed that one of the editors in this blog had published an essay about the Tewkesbury battlefield during the War of the Roses in 15th century.

That morning I was in the public library. I rarely go to the libraries. Yes, sometimes to British Library but not for the books but for a coffee and to enjoy the buzz of the central London. I also do not borrow books from the libraries. Let me confess that I do not read a lot from the hard copy books or even from the Internet books that now a days are available. I have not read much for many years. I like the writing more than the reading. I believe that I know everything, in a way!

In that day I stopped in front of one of the shelves, just randomly, and looked and took a book. I just took it and carried it to the circulation desk. Well, we do not need any circulation desk anymore that much these days. I took it to the borrowing machine. I came home and started to read it. Its title was, “Wars of the Roses – Ravenspur: Rise of the Tudors,” by Conn Iggulden. It is one of the four volumes the author has written in the form of a story book but with an attempted historical conciseness.

My surprise was due to the fact that the climax of the book happened at Tewkesbury indeed. The title of the book is on Ravenspur but all the heat of the story is at that battlefield – Twkesbury – and also the turning point of the King Edward IV. There is a vivid picturesque description of Twekesbury. This was a coincidence that I interpreted it in a way in relation to what my friend was busy writing it in the same morning and at the same time that I was in the library.

I believe, again in a way in the existence of something known as the fairy of the libraries. When I was young I used to go to the libraries much taking books and start to read them randomly. Later in my life I noticed that I could integrate those pieces in a strange way and deduce my unique ideas about everything without becoming shaky about them. 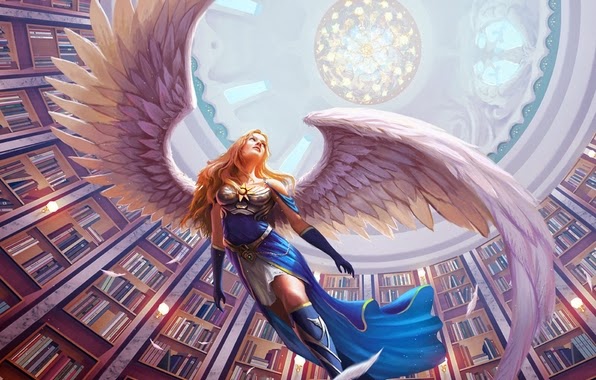 For example, I’d like to attach this story to the politics. If we do not support libraries and starve them in terms of the funding that they need as it is happening right now in our UK, if we do not frequent public libraries and do not encourage younger generations to use them then we might lose or reduce the number of the library angels or they might face extinction similar to many material and visible species on our planet. We cannot, then,  go into a library and randomly take a book and sit and read part of it and become more inquisitive and more curious about certain things. I have not finished it and I hope to continue this but right now I am in my usual hurriedness.