This is the first draft of the description of a visit to Tewkesbury on the 22nd of August 2014 where the main purpose was to watch a performance of the Kast Off Kinks, a cover of the original Kinks Pop Band, at the Roses Theatre in the evening.

This however is an account about our experience while following the Battle Trail. This account begins from knowing nothing of the detail of the events of the Battle and had to rely on pure memory and consultation of Google Earth and maps to retrace the rout taken to serve as a memory jogger of our own experience.
Over time, as a result of research, the detail, as it built up, becomes fragmented and out of position in its presentation and not being an editor and able to condense things down into one piece of work, it will be presented as if a journey of discovery which in itself was enjoyable. The next post will be a version of this but with more information added.

As such, things have been added to subsequent versions of this original text but I had also removed the comment about the experience in Manchester which I felt was relevant at the time but not later. However I have changed my mind and retained it on posting this first draft because it may serve to illustrate the point that we may be open and sensitive to certain things and then closed off, spiritually, to others. This also illustrates that we ourselves, in the main, have no control over when we are to be ”’enlightened”. 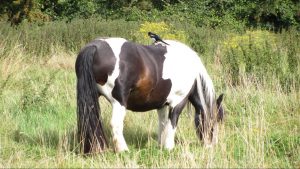 The Battle of Tewkesbury. 1

The sight of the bird sitting on the back of a horse was something that Mathew had spotted while making our way out from the Battle field site in Tewksbury, a battle which took place during the War of the Roses in 1471. This photograph had been uploaded to my Facebook page so that it could be sent on to his Facebook account via messenger but every time I see this picture it always beckoned a description of our walk along the Battle trail but which I had kept putting off. However last night I felt pushed to seek some location information as a basis for writing, inputting a search request for Long Field which I discovered does not exist and by taking a look at Google maps to refresh my memory of the location since I had followed Mathew and he had possession of the guide at all times.

About a week earlier, before the visit, Mathew had put out an invitation on his Facebook page for friends to accompany him to see the Kast Off Kinks at the Roses Theatre but there were no takers so I offered to go and take him there. (22nd August 2014)

We had set off early in the day because we wanted to have a good look around this ancient town and this was of particular interest to Mathew who also expressed an interest in following the route of the Severn Way in the future. We enjoyed looking at the architecture of the old timbered buildings as well as inside of the Abbey and also a walk along the river, crossing at the Mill Weir which took us along the river on the other side until we could cross back again for the return.

The most notable experience though for myself was the walk along the trail of the Battle and Mathew took custody of the guide for the route so I could just tag along, taking in the scenery unhindered as we walked.

As we progressed along the trail that ran parallel with the Abbey I could see that the original roof had been replaced, indicated by the evidence of the original roof flashings still embedded in the side wall of the tower which indicated a roof of a higher ridge and steeper pitch than what is there now and so could not help wondering what event in history had caused this to be. 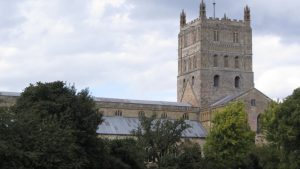 So we continued across the field until we met a road which we had to cross and then continue along a leafy lane until Mathew said that we have to turn in here. Because Mathew had possession of the map, I had no clues whatsoever as to where we were but we found ourselves making our way along a narrow path of compacted mud that briefly cut through the hedge, trees and undergrowth and it was along this very short distance that sloped gently downwards that I could feel a very strong emotion of sadness, despair and sense of mourning which I took to be an indication that we were approaching the site of the battle. Mathew may remember my comment about this at the time. That particular feeling only lasted for the very short duration of passing through and once into the open field it was gone and found myself back to normal and at no other time did any such emotion recur from the time of entering the ‘Bloody Meadow to when we left the whole designated battle area to enter onto the A38 road.

As soon as we found ourselves in a long narrow stretch of field (Bloody Meadow) I immediately put my tactical hat on and looked around at the surrounding area and speculate on possible tactics. Immediately we began walking ahead through the narrow strip of field, I looked directly over my right hand shoulder at the gently sloping ground upwards that also seemed to sway away to the right in the distance of what I could see through random trees and hedgerows which seemed to frame the viewpoint and thought to myself that that would be a good place to approach from for an attack on horseback.. Also immediately on our left hand side I checked out land lying to our left, running up it a little for a better view for it was a very steep gradient for a very short distance before it began to flatten out but could not see very much to draw any conclusion and although the intention was to check it out, I dismissed it as a possibility. Mathew may also remember my comment on the sloping field to the right and the sight of my attempt to run up the steep slope on our left hand side. 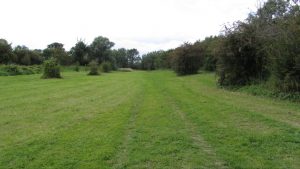 The view looking back to where we entered the Bloody Meadow. It was an           afterthought after we continued walking and would have liked to have been much closer so a telephoto shot was taken as well.

Thinking about it now, I am curious to know what may have taken place in that bushy area that connects the lane to the battle site. What could be the source of the emotion? Could it have been a place where towns folk concealed themselves to observe what had been taking place and were so shocked at what they saw? The reason I think this may be a possibility is because at no other time within the whole battle area did I feel anything else in that context and this also reminds me of an occasion back in early 1980 in Manchester when we moved from Liverpool to change location and on knocking on the door to be allowed in for the first time at a house in Demesne Road, I could feel something about the place which left me thinking to myself: ‘Why does it feel like this?, it’s a Church Centre’

As it turned out, I learned from a person about five years later who had also lived there at a different time to myself that the house had previously been used for prostitution and that there had been two attempts to exorcise the bad spirits there but that it failed and the entities kept returning. I can say that during the time I was there people were reporting of having bad dreams like being chased by monsters and one particular person said of being pursued by one with lips like protruding suckers trying to kiss him. Some people were so badly affected that they elected to sleep elsewhere in a van, like Manchester Airport to escape as it was also effecting their day in a detrimental way. I felt none of this while there but did experience one occasion when a group of us were sat on a sofa discussing spiritual things which brought a bright and vibrant atmosphere and a person who had got up with a mug in his hand to go to the kitchen turned around at the open door to continue listening to the conversation when the cup suddenly exploded into tiny pieces with a bang. So from this it suggests that although I may be sensitive at times, I also seem to be protected from the worst elements.
RGH

3 Replies to “The Battle of Tewkesbury”