After recently watching a documentary about the the origins on the Gnostic Bible shown by the BBC, I have taken an interest in them and recognise them as being the earliest writings which in their simplicity also preserve profound spiritual truths. Although they are simple and almost skeletal in their construction, a saying must be repeatedly read over and over in order to be able to perceive the inner meanings which are then almost difficult to describe in their layers of complexity. The Gnostic Bible had been recommended to me by people I met on the street back in the early mid 1970s but had never taken a look even though notes had been written in a diary as a reminder. One particular thing that Jesus said in the Holy Bible which comes to mind is: ”I have many things to tell you but you cannot bear them now.”
There is much content written in the various Gnostic Bibles that is not contained in the Holy Bible, but in the Gospel of Thomas there is much that was included as well as left out. Here is a saying which could possibly be the origin of the concept of the Trinity as a result of interpretation and which eventually found its present form during the fourth century AD. (CE for those of modern education)

So where it says ”Where there are three gods, they are gods”, this is most likely a reference to gods with a small g just like the multiple gods that the Romans would worship, for instance.
With regards to the reference in the second line, Jesus often refers to God the Creator as His Father, the One God .

It just so happened that today one of the members posted a copy of The Lords Prayer which is shown written in Amaraic, which was the language of Jesus, followed by its contemporary translation which begins with Father-Mother of the Kosmos……… So we can see that this duality was also a concept held at the time, which also has also no been in use in our current,modern times as a New Age concept.

Jesus does clarify who and what is God in the writings of The True Gospel Revealed Anew by Jesus and The Celestial Spirits and emphasises that He himself is not God and that the belief in the Trinity is erroneous and holds back Soul development.

This was posted 3 days ago:
Matthew Greenlee ”The Gospel Of Thomas, was written long before Rome started to use Christianity to control the masses. They did this by making Christianity the religion of the Empire. After many years of brutally oppressing Christianity.
The New Testament is a collection of writings that have, unfortunately, been manipulated, and altered way too many times over the years. You can actually see where “human” influence has changed these great gospels.
The Gospel Of Thomas, has been buried under the ground, for the last 1700 years or so. Therefore it gives a much more honest, and authentic words of Yeshua (Jesus).
As does the rest of the Nag Hammadi Scriptures.
What they give to us is a pure understanding of Christianity before it was altered and watered down by the Romans, and without 2 thousand years of human altercations.
It is the closet to the Truth, we have to date.”

In this context here is the Lords Prayer in Ameraic and it’s translation. 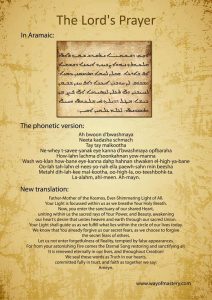 Here is a website which explains the development of the dogma of the Trinity and explains in detail that it does not exist in the Holy Bible. It cover the issue in an article titled  Trinity-Fact or Fiction. It is worth reading the sections: Introduction, How the Trinity became Doctrine, and more as you will see,

Here is the prayer given by Jesus 100 years ago to James padgett through the mediumship of automatic writing:http://www.divinelove.org/The-Prayer-for-Divine-Love

Also today this question was asked to the members of one of the Gnostic Bible forums that I now belong to:
Agree or Disagree: ”It isn’t our job to worry about how to get into Heaven. Our job is how to make this World a heavenly place to be”

Knowing where to search for the definitive answer and far from being just a few lines, here is an explanation conveyed to James Padgett through the mediumship of automatic writing from Jesus just over 100 years ago: