The bar set for pensioners over 75 who will no longer be eligible for a free TV license is very low, that is anybody who does not receive Pension Credit.

It is very clear that Britons exist on poverty pensions compared with their EU counterparts, and this has always been the case. Pension credit is paid to those who receive below what is deemed to be the minimum amount needed to live on which is currently set at £167.25 per week by law but what this means is that anybody who may have deferred their pension in order to boost it a little so that it may reach this figure, deemed to be the minimum required to live on, will be exempt from receiving any pension credit at all and as such are barred from any other benefits which would otherwise be available to them. This is doubly unfair because people who have made this initiative are saving the government from paying this difference which is set by law. So what this means is that a person would have deferred their pension for nothing and at the same time lose additional pensioner benefits.

So it is clear how the government rigs the figures to their own advantage. The same goes for anybody who may have modest savings to fall back on for emergencies as this is calculated as potential income which is added on top of the state pension figure this is set at £1 per week for every £500 over £10000 saved and this continues for as long as this amount remains saved. These figures are fantasy figures considering the miserly interest rates which have been paid by Banks to savers since ”Bankers Greed” which resulted in the implosion of the economy since 2007/8. ( This situation looked ridiculous because my savings had been multiplied by ten times the actual amount by DWP so made the amount of supposed income look stupid when if fact it should amount to nothing. I will call them up tomorrow to have it corrected. Thanks to the current news on the withdrawal of TV licences for the over 75’s I took another look but I had been aware of the rigging over a year ago but today decided to apply myself to express it.)

The Government should be paying pensions to the equivalence of those in the EU without resorting to means testing trickery. This would also automatically solve the problem of the millions of pensioners who for one reason or another fail to claim Pension Credit.

Also under this system there are very few people who can afford to retire full time and need to keep working because of housing costs which have again become inflated because of the government policy of encouraging investment in the housing market, much of which have come from outside of the UK. 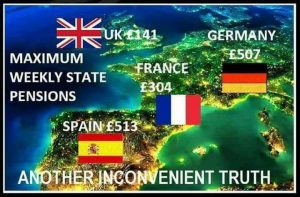